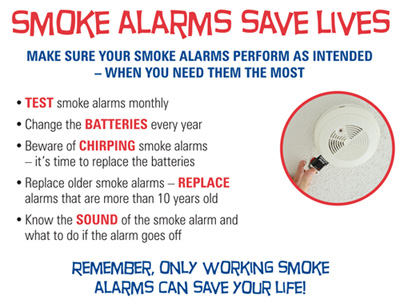 Q...Why should I have a working smoke alarm?

A...A properly installed and maintained smoke alarm is the only thing in your home that can alert you and your family to a fire 24 hours a day, seven days a week. Whether you're awake or asleep, a working smoke alarm is constantly on alert, scanning the air for fire and smoke.

A...There are many different brands of smoke alarms available on the market, but they fall under two basic types: ionization and photoelectric.

It cannot be stated definitively that one is better than the other in every fire situation that could arise in a residence. Because both ionization and photoelectric smoke alarms are better at detecting distinctly different, yet potentially fatal fires, and because no one can predict what type of fire might start in a home, the USFA recommends that every residence and place where people sleep be equipped with:

A...Smoke alarms are powered by battery or they are hardwired into the home's electrical system. If the smoke alarm is powered by battery, it runs on either a disposable 9-volt battery or a non-replaceable 10-year lithium (â€œlong-lifeâ€) battery. A backup battery is usually present on hardwired alarms and may need to be replaced.

These batteries must be tested on a regular basis and, in most cases, should be replaced at least once each year (except for lithium batteries). See the Smoke Alarm Maintenance section for more information.

Since smoke and many deadly gases rise, installing your smoke alarms at the proper level will provide you with the earliest warning possible. Always follow the manufacturer's installation instructions.

Hardwired smoke alarms should be installed by a qualified electrician.

Is your smoke alarm still working? Smoke alarms must be maintained! A smoke alarm with a dead or missing battery is the same as having no smoke alarm at all.

A smoke alarm only works when it is properly installed and maintained. Depending on how your smoke alarm is powered (9-volt, 10-year lithium, or hardwired), youâ€™ll have to maintain it according to manufacturer's instructions. General guidelines for smoke alarm maintenance:

A smoke alarm is just doing its job when it sounds while you're cooking or taking a shower with lots of steam.

- If a smoke alarm sounds while you're cooking or taking a shower with lots of steam, do not remove the battery. You should:
- Open a window or door and press the â€œhushâ€ button,
- Wave a towel at the alarm to clear the air, or
- Move the entire alarm several feet away from the location.

Disabling a smoke alarm or removing the battery can be a deadly mistake.

Help Us Help You!

Help Us Help You!